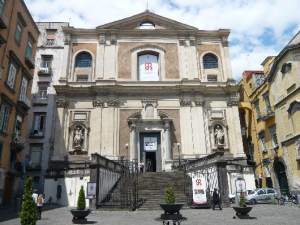 The monastic complex of Donnaregina was rebuilt after the earthquake of 1293 thanks to the donations of the Queen of Naples, Mary of Hungary, whose imposing tomb is now situated on the left side of the nave of the fourteenth-century church. In the second half of the sixteenth century the monastery was transformed according to the dictates of post-Tridentine with the construction of a large cloister porch; early in the seventeenth century, the nuns decided to build a modern church from scratch, before annexing the area of seclusion. The two buildings that originally communicated with each other, were divided after the restoration of 1928-34. The church was built around 1617 and was later consecrated by Cardinal Caracciolo in 1669, when the construction was almost completed except for the dome. 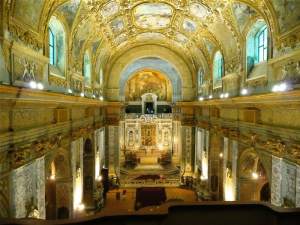 As you go up the majestic staircase, you enter the church, where you can see a stark contrast between the bottom, which is richly decorated in plastic, and the top above the chapels, especially after the loss of the frescoes and after the whitening stucco; This impression is underscored by the gloom of the chapels which better emphazises the polychrome marble facing the aisle. On the vault you can admire frescoes by Francesco De Benedictis, 1654, in the shell of the dome the frescoes depict Heaven Augustine Beltrano in 1655. The main altar of the presbytery is the work of John and John Philip Ragozzino designed by Solimena; the sides are formed by two large paintings by Luca Giordano

representing the Wedding at Cana and the multiplication of the loaves and fishes, signed and dated 1705 which are considered to be his last works. The nuns’ choir is located at the top level of the apse; the cycle of frescoes portray the life of St. Francis and was built by the young painter Francesco Solimena in 1684, as well as the big frontal scene depicting The Miracle of the Roses and the Saints Andrea, Gennaro and Bartholomew, above the door that once led to the old complex you can see the marble relief of St. Francis receiving the stigmata the decorations of the door instead are by an unknown neapolitan artist of the sixteenth century . The chorus instead is located above the counter of the church and maintains fragmentary frescoes by Luca Giordano of about 1,687; only the lunettes with Jael killing Sisera with the pin remain together with Santa Margherita and the dragon and King David. Inside the church is located the Diocesan Museum of Naples, which has a rich collection of works of religious art. The church of Santa Maria Donna Regina Vecchia is behind Santa Maria Regina Nuova, the latter built in the seventeenth century in order to replace the previous one; Since 2007, the two churches are part of the circuit of the Diocesan Museum of Naples. Inside the old church is kept the largest and the most important cycles of frescoes of the fourteenth century in Naples; on the left wall of the nave of the church is placed the sepulchral monument of Mary of Hungary, by the fourteenth-century Senese sculptor Tino Camaino. In front of the tomb, there is the chapel Loffredo, a rectangular plan with two mullioned windows and covered by a cross vault. In the chapel you can admire the cycles of the fourteenth century frescoes depicting the Annunciation and the Madonna and Child in the rear wall, with a wooden crucifix dating back to the fourteenth century as well as stories of the life of Saints Peter and Paul and, on the right wall stories of the life of St. John and, on the entrance wall St. Francis preaching to the birds and receiving the stigmata; the cycle is of unknown attribution and some elements are inspired by Giotto with Byzantine reminiscences. INFORMATION: ADDRESS: Largo Donnaregina – 80138 – Naples The complex is open Monday to Saturday from 9.30 to 16.30, on Sundays from 9.30 to 14.00. It is closed on Tuesdays. TICKETS: Adults € 6.00, reduced € 4.00 for people over 65, under 18 and groups; € 3.00 for students and parishes