Caves Platamonie, Mount Echia and Pizzofalcone. Under the skin of Naples

Have you ever heard of the Platamonie Caves? They are among the most mystical places in the city of Naples.

Walking through the streets of the centre of Naples, not too far from the splendid seaside Caracciolo, it is very likely that you have noticed a large spur of tufa rock with slightly artificial and unusual shapes. What you have seen represents one of the most ancient points of civilization for the city: the Echia mountain. 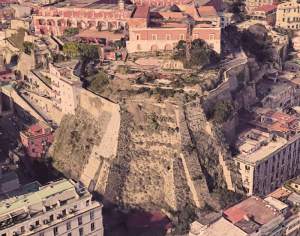 It is precisely there that the urbanization process of the ancient Greek city of Neapolis, in the middle of the Mediterranean Sea, begins. A place where sky, sea and nature met in a long and powerful embrace.

We are in the heart of the San Ferdinando district precisely around the hill of Pizzofalcone so called when King Charles I of Anjou decided to build a falconry for the royal hunting of falcons.

Today the shape of that area is totally different from the past when the village of S. Lucia was bathed by the waters of the sea. During the nineteenth century, the works of the so called “cosìdetta colmata” totally revolutionized the conformation of the coastal part of Naples with the construction of the current Via Partenope.

Bringing attention back to Mount Echia, today it is in a phase of functional recovery, with the installation of an elevator that will lead to the complete use of the tuff promontory, for a heavenly vision of the city.

In ancient times this rocky spur was called by the Greeks Platamon with the literal meaning of “cliff dug by caves”, it is here in fact that there are several caves and cavities of the archaic age, the caves platamonies (or platamonic, see also here) in fact.

Originally inhabited, they then became famous for having been the site of Dionysian rites, orgiastic and mithriac rites, causing a scandal during the period of the Spanish Viceroyalty, to the point that the Viceroy Don Pedro de Toledo (it was he who had the Spanish quarters built) began a series of works to obstruct these cavities.

To this day, these legendary caves are at the centre of an important debate for their recovery and definitive valorisation.

While waiting for this to happen you can still get lost in this beautiful neighborhood, rich in history and close to the sea. The sound of the waves, the noise of seagulls and the taste of salt will accompany you during your visit.

Some associations today, such as “Medea Art”, inform tourists and citizens about these extraordinary places through the organization of guided tours. So what are you waiting for? Come and discover the incredible platamonie caves of Naples.