Today we are near the ancient Roman port of Miseno, a town that is part of the municipality of Bacoli, within the metropolitan city of Naples.

An ancient place, already frequented in the Iron Age, which became a port in the mid-fourth century BC and after about two centuries also flourishing residential center of the Mediterranean. Even at the time of Emperor Augustus it became the most important Roman military site in the area, and even more so at the time of Emperor Marcus Aurelius, when it was among the first ports in the Mediterranean even hosting the first imperial fleet, the Classis Praetoria Misenensis.

A place of ancient charm like this one, where it is possible to admire the remains of what can be considered a very important monument of Roman archaeology: the Piscina Mirabilis.

This place, for several experts, must have been the arrival point of the huge Augusteo del Serino Aqueduct, an infrastructure of the Augustan era that allowed the proper management of water in Campania. 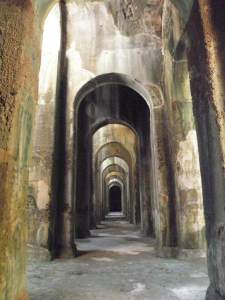 It is the largest cistern known today ever built by the ancient Romans, and it had the function of supplying water to the many ships belonging to the imperial fleet.

The large structure was excavated entirely in the tuff of a hill in front of the port, and the resulting construction is to be considered as the avant-garde of engineering for the time.

The latter, rectangular in shape, was divided into naves with large cruciform pillars that supported the barrel vault. The water was thus drawn through wells built on the terrace overlooking the vaults with the use of hydraulic machines.

The entire wall structure is made of opus reticulatum (a special Roman building technique) and is covered with material that made the whole thing waterproof. A series of windows along the top of the side walls and the upper wells themselves were designed to illuminate and ventilate the room. At the bottom, in the central nave, there is a second swimming pool, which was used as a decantation and discharge tank for the periodic cleaning and emptying of the tank.

Archaeological sites of this type, apparently less fascinating than public works of greater appeal such as amphitheaters, squares and Roman temples are instead what make the campania, and the whole of Italy one of the nations with the greatest diversification within the historical, artistic and cultural heritage in the world.