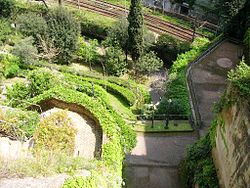 The Parco Vergiliano is located on the slopes of the hill that separates Mergellina from Fuorigrotta. It was one of the most frequented by the travellers of the Grand Tour and is enclosed in a small park set up in 1930 on the occasion of the millennium of the birth of Virgil. Inside the park are the tombs of two great poets, Virgil and Leopardi.

The sepulchre of Virgil rises on a high bank of Tuff and recalls Roman funerary monuments present in the Campana area; It consists of a cubic base in opus coementicium surmounted by a cylindrical drum. The funerary chamber inside it has ten niches and is covered by a barrel vault with three small openings from which the light enters. In fact it is a Roman columbarium of unknown family of the Augustan age, but the ancient tradition wants that here are preserved the mortal remains of Virgil, who lived for a long time in the Territory partenopeo.

To the right of the tomb is the entrance to the Crypta Neapolitan, also called Grotta di Posilipo or Grotta di Virgilio; It is a gallery of over 700 meters dug under the tufaceous ridge of Posillipo, realized at the end of the I century B.C. to speed up the connections between Naples and Pozzuoli. Only at the end of the nineteenth century was decommissioning, when it was now possible to reach Fuorigrotta along the new gallery of four days.

A short distance from the entrance, there is the tomb of another great poet, Giacomo Leopardi, in the beginning buried in the church of San Vitale at Fuorigrotta and transferred to these places in 1934, when the works of the Parco Vergiliano were completed; The monument is inspired by the repertoire of roman cippi.