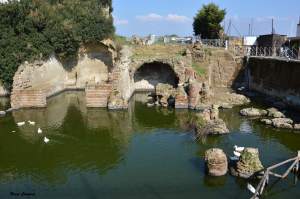 “Sacello degli Augustali” is located in the Forum area of the ancient city of Misenum, submersible today from bradyseism, not far from the theater. The complex was built in Julio-Claudian era and dedicated to the cult of Emperor Augustus; a particularly important moment for the complex was in the second half of the 2nd century AD, in the time of Marcus Aurelius, thanks to the generosity of two Primitive Augustales, Lucio Laecanius curatores and Marcus Licinius primitive. Lucio Laecanius Primitive indeed, along with his wife, the Priestess Cassia Victoria, paid the restoration of the façade of the temple, with marble pillars and an architrave inscribed capitals cipollino, pergameni realm with the title dedicatory. The building was destroyed in the late 2nd century AD, presumably due to seismic events. 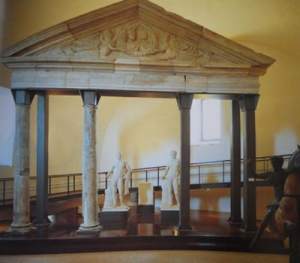 The complex is divided into three main areas which were partially excavated in the Tuff; the central building, the real shrine, consists of a rectangular Temple podium before whom the altar; using a marble staircase, flanked by two podiums of masonry, originally covered with slabs of marble and surmounted by statues leads to the tetrastyle portico with columns in cipolin with parchment-type capitals, over whose epistyle, bearing the inscription, was the pediment decorated with reliefs. The right room of the shrine, built in opus reticulatum, was decorated with stucco finishes and painted plaster on the walls and vaulted ceilings and vaults.

The monument was discovered in 1967, when they were found the statues of Vespasian, Nerva, Tito, abundance, and of deities including, Asclepius, Apollo and Venus, a small type of Herculaneum and another on dolphin, now on display in the breakfast room of the Museo Archeologico dei Campi Flegrei (Museum located Castle Bay), where houses the Epigraphic and sculptural, architectural complex of the shrine of the Augustales.

INFORMATION
Address: Via Miseno, Bacoli (NA)
Free admission
Open from the outside or by contacting the Association Misenum (tel. 0815233977)