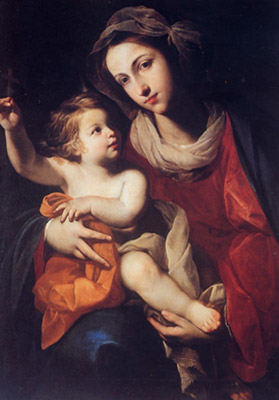 The church was founded in 1587 by order of Constance Doria del Carretto, who donated it to the Teatini fathers. It was designed by the architect Francesco Grimaldi in 1610 and rebuilt to its present appearance.

The church is composed of three naves with a Latin cross plan inscribed in a rectangle, at the sides of the chapels and at the top of the dome, the current facade was rebuilt in the second half of 1700.

the imposing dome, designed by Grimaldi, brings a great deal of light into the whole room thanks to the large windows opened in the drum.

The interior and the decorations by Giovan Battista Beinaschi, who frescoed the nave and transept with scenes from the Life of the Virgin (1668-1675) and the dome with the Coronation of the Virgin; some of these depictions such as the Presentation of the Temple were destroyed during the last war.

The large canvases are by Francesco Maria Caselli made around the middle of 1600 for the decorations of the apse and transept.

The chapel dedicated to the Immaculate presents a canvas depicting the Virgin Mary by Massimo Stanzione, while other paintings by Giovan Bernardo Azzolino campegiano in the first and third chapel on the left side.

The high altar, by Giovan Battista Broggia is another important work of the basilica and is preserved in the choir: it is in neoclassical style and has on its right a painting by Paolo De Matteis depicting St. Andrew in ecstasy.

The two tombs sculpted for the Serra di Gerace family are by Tito Angelini and can be found in the first chapel.

In the church there is also a marble monument by the jurist Giuseppe de Gemmis (1734-1812).

Recently, in the area on which the building stands, archaeological finds have been found dating back to Naples in the sixteenth century during excavations for the new metro station.