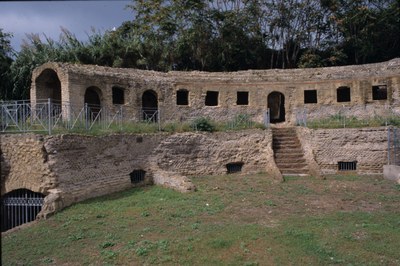 The grave of Agrippina, mother of Nero consisting in the remains of an imperial-era building located close to the sea, so recognized by tradition, is actually a theater–nymphaeum, forming part of a large seaside villa, which was destroyed.
The structure, originally a odeion (auditorium music auditions or performances covered mimics) from the time of Augustus, between the late 1st and early 2nd century after Christ was then transformed into a nymphaeum Exedra.
The whole structure consists of three parliaments at different levels: in ca. 1 meter and 30 below the level of the current Beach opens the first Chamber, the Chamber is instead covered by a rampant on whose top surface you can see traces of a staircase in opus reticulatum; on the outer wall there are 3 openings alternating with Windows.
Further down there is a roofed environment once Decorated with stucco; same decoration is found on the walls of the niches and Windows, and that perhaps the building originally connected with the villa. On the same level as the previous Chamber lies a III House, with the vault collapsed and whose inner wall consists of stucco-clad columns with Corinthian capitals, which forms a kind of corridor divided into small compartments by transverse SEPTA.