The Church of San Lorenzo Maggiore is one of the most fascinating monuments of the Gothic age in southern Italy.  It is located in Piazza San Gaetano, in the historical centre of Naples, and its design and the later works’s history are quite complex. 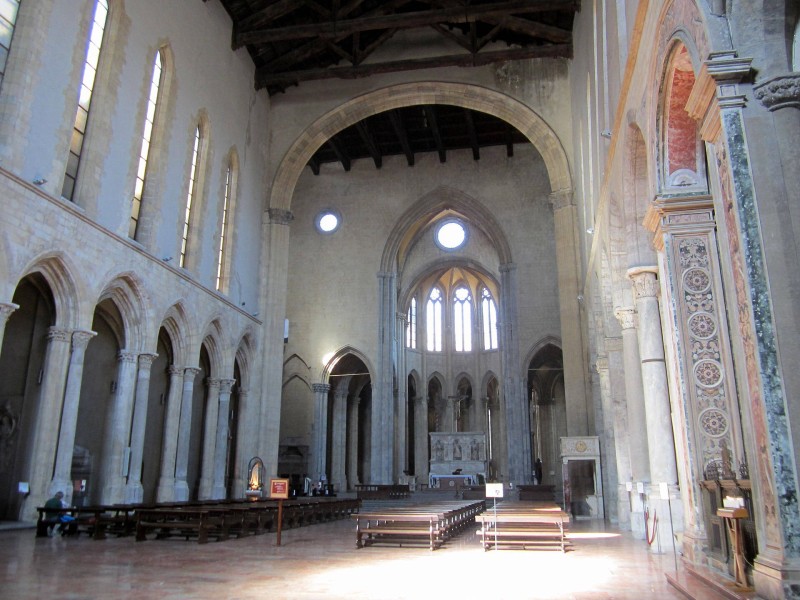 The early-Christian basilica was dedicated to the Protomartyr Lorenzo, and it was raised at the time of the Bishop John II (533-555), in an area that in roman times was occupied by a macellum, the food market of the city.

Around 1270, thanks to the initiative and funding of King Charles I of Anjou, the works for the new Church began. It was supposed to be bigger than the previous basilica and inspired by the French’s Gothic architectural style, which you can clearly notice in the apse, with its splendid ambulatory, radial chapels and high presbytery.

In later centuries, the Church was subjected to several renovations, in order to repair the damages caused by violent earthquakes.

From the half of the sixteenth century and then for at least two centuries radical changes were made, until the Gothic’s elements of the church disappeared, in favor of Baroque’s structures.

The early twentieth century were a time of great difficulty: there was a progressive decline of the Church, exacerbated by the expulsion of Franciscans in 1866 and culminated with the closing of the building in 1905. Later, thanks to numerous renovations, the Church of San Lorenzo regained its appearance.

The Church and convent have a rich historical and artistic heritage. In the Church were buried many members of the Royal House of Anjou, including Catherine of Austria, the first wife of Duke Charles of Calabria, to whom was dedicated the beautiful tomb, made by the great sculptor and architect Tino di Camaino in 1323-25.

Also, in San Lorenzo, the Prince Ludwig of Anjou, future Bishop of Toulouse, was ordered priest; the magnificent altarpiece by Simone Martini portrays him. The altarpiece was made in 1317, and after being kept for centuries in this church, you can now admire it at the Museum of Capodimonte.

In San Lorenzo also worked other important artists such as Antonio Baboccio da Piperno, Colantonio and Giovanni da Nola. Antonio Baboccio da Piperno in 1421 realized the tomb of Ludovico Aldomorisco, which is now located between the first and second Chapel on the right. Colantonio, the greatest exponent of the neapolitan school of painting of the fifteenth century, and master of Antonello da Messina, in 1444-45 painted the great Polyptych for the Rocco family. It potrais Saint Jerome in his study and Saint Francis that gives the rule, and it is also at the Museum of Capodimonte. Giovanni da Nola, one of the greatest sculptors of the 16th century, made the wonderful altar.

The Baroque period, beautiful in its decorative, functional and organic colour, is present at its best in the Chapel of St Anthony and in the Cacace’s Chapel: Cosimo Fanzago made both of them in 1638-39 and in 1643-49. 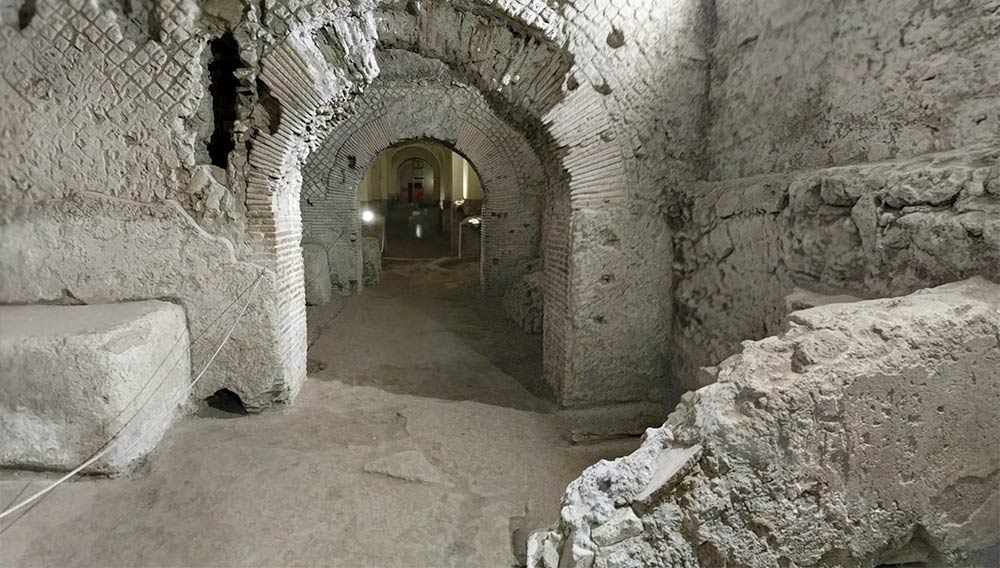 The ruins of San Lorenzo

The stratification of the archaeological excavations is complex but it is still possible to reconstruct the stages that have occurred over the centuries. The oldest structures are the foundations, made by blocks of tufa. They dates back to the fourth century b.c., so during the Greek era. On the foundations, there’s the macellum, the ancient food market, which is dated back to the second half of the first century a.d. Its main entrance was on via Tribunali. The general structure probably consisted of a large square portico, with shops on four sides; at the center of an open space stood a circular tholos (part of the basement is still visible in the cloister). The road of approximately 60 metres, corresponding to one of the stenopoi in alignment with the current vico Giganti, is one of the most picturesque parts of the underground archaeological area: many shops were on that road. In one of the buildings that stands over that road probably was kept the treasure of the city. The whole area was affected by profound alterations over the centuries, until it was abandoned in the late fifth century, as a consequence of a flood that destroyed a great part of the old city. During the early Middle Ages there was a revival of the area thanks to the building of San Lorenzo’s Basilica.