Sansevero Chapel, also called Santa Maria della Pietà of Sangro, was founded in 1590 by Giovanni Francesco di Sangro, Prince of Sansevero and enlarged by his son 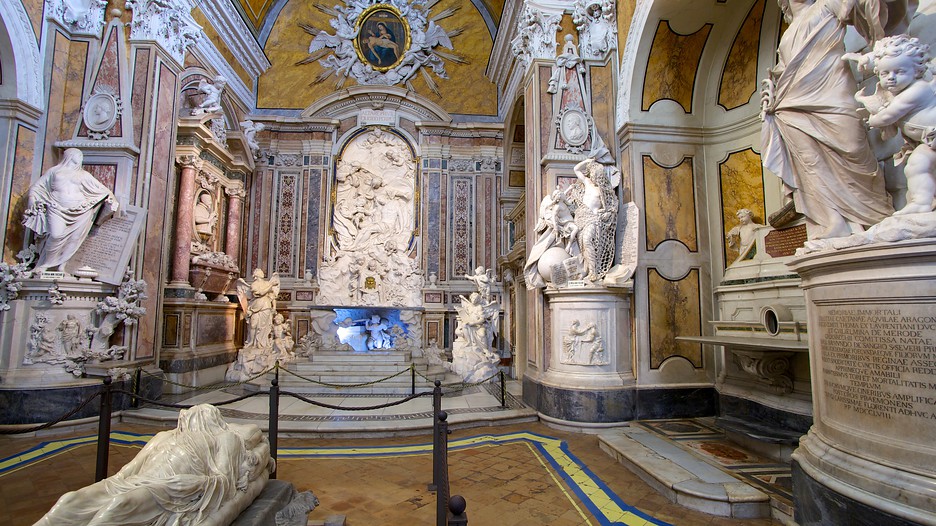 Alessandro starting in 1608: he had the intention of addressing it as the burial place of several members of his family. It is one of the most interesting historical complex of the city of Naples, strongly influenced by the personality of Prince Raimondo di Sangro. He was a scientist, an academic and a Grand Master of the Scottish-Rite Masonry in the Kingdom of Naples. Between 1749 and 1771 he redecorate the Chapel, and gave the artists a precise iconography to follow.

The Interior of the Chapel is spectacular. It has a lot of different decorations, such as the frescoes on the vault made by Francesco Maria Russo in 1749; the Glory of Heaven with Saints of the family di Sangro; the colored marbles; the medallions with Cardinals on the vaults made by Francesco Queirolo; the tombs and statues intended to commemorate the persons buried inside them and to celebrate the virtues of their spouses. 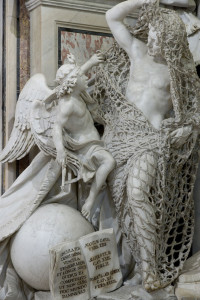 Above the entrance there’s the tomb of Cecco di Sangro. It was sculpted by Francesco Celebrano in 1766, and it shows an episode from the life of the deceased. Cecco di Sangro was locked in a chest because it was considered died in battle, but then he came out of it with a sword in his hands to terrorize his enemies.
Between the façade and the right wall there is a statue depicting the Divine Love from the 18th century; under the first arch on the right there’s the tomb of Paolo di Sangro; above the first pillar, there’s the Education, a statue made by the artist Queirolo in 1753; under the second arch there’s the monument to Paolo di Sangro, of Antonio Corradini; above the second pillar there’s the Domain of himself made by Celebrano in 1767.
In the adjoining compartment, there’s the tomb of Raimondo di Sangro, designed by Francesco Maria Russo; above the third pillar there’s the work of Queirolo, Honesty, and in the following chapel there’s Saint Oderisio.
Above the main altar it’s located the Deposition, which is considered the masterpiece of Francesco Celebrano. It was constructed between 1762 and 1768. The two Baroque Angels at the sides of the altar were made by Paolo Persico, which is also the author of the stucco angels frame surrounding the painting of Piety.
< 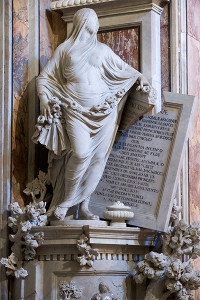 At the left side of the chapel there’s the tomb of Alessandro di Sangro, Patriarch of Alexandria, from the 17th century. Above the pillar to the right of the altar there’s the Disillusion made by Queirolo, with an extraordinary technical skill; above the pillar to the left of the altar there’s Modesty, a veiled figure by Corradini of 1751.
In the centre of the nave there’s the most famous work of the Chapel, the veiled Christ, made by Giuseppe Sanmartino in 1753. It is an amazing work for its truth and finesse, and it still retains the original patina.
In the third chapel on the left, there’s the statue of Santa Rosalia by Queirolo, placed side by side with the tomb of Paolo di Sangro, the fourth Prince of Sansevero, and the tomb of Giovan Francesco Paolo di Sangro by Jacopo Lazzari.
In the crypt, wanted by Raimondo di Sangro, there are two anatomical machines (skeletons in which we can observe the venous and arterial apparatus), which helped to increase the celebrity of the Prince.
INFORMATIONS
Address: Via Francesco De Sanctis, 19/21, 80134-Napoli
Tel: + 39 081 5518470/fax.
Timetable:
Weekdays: 09.30-18.30
Sundays and public holidays: 09.30-14.00
Last entry allowed up to 20 min. before closing
Closed on Tuesdays
Ordinary ticket: € 7.00
Artecard: € 5.00
Convention Alitalia: € 5.00
Boys from 10 to 25 years of age: € 5.00
Schools: € 2.00
Children under 10 years: free
Facebook Twitter WhatsApp LinkedIn Pin It