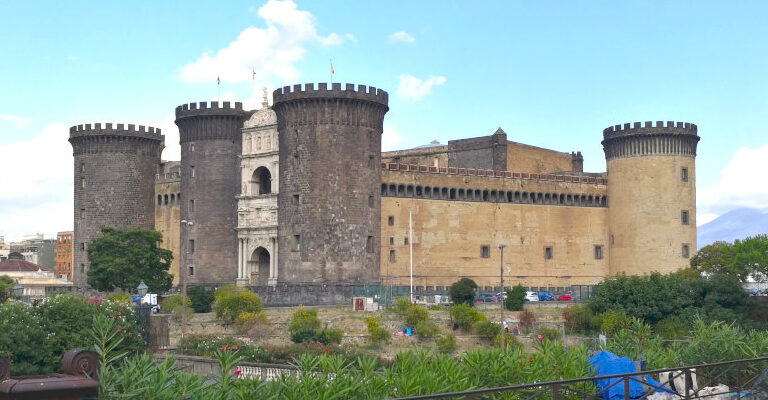 Among the main attractions that the city of Naples offers to lovers of art and culture there is certainly the Castel Nuovo, called in this way to differentiate it from the oldest Castel dell’Ovo and Castel Capuano, is also universally known as Maschio Angioino, from the medieval Florentine term “mastio” which indicated, in a structure with more towers, the largest and safest in case of war attacks.

This extraordinary place is located just a few steps from the Municipio metro station of line 1 (even the medieval foundations have been restored within the architectural design of the station).

Once out of the subway, once we are in front of the doors of the castle we can only be captured by the beauty of the Aragonese triumphal arch set between the two large main towers, this arch is one of the most important contributions to the Italian Renaissance by the city of Naples.

Its history begins in 1442 when Naples was conquered by the Aragonese, King Alfonso I commissioned works to expand and modify the entire structure. The triumphal arch was intended to be the celebration of the victorious entry of Alfonso I of Aragon into the city of Naples, as is clearly visible in the upper part where is inserted a group of sculptures commemorating the event.

The latter depicts King Alfonso I on a chariot pulled by four white horses, with a figure of a woman in front, Parthenope symbol of the city.

Once you have crossed the entrance, you will find yourself in front of the splendid courtyard from where the route of the Civic Museum of the city of Naples branches out, which collects the works of art (mainly paintings, sculptures and liturgical furnishings) owned by the City of Naples. This museum route winds between: the Hall of Armoury, the Palatine Chapel, the Charles V Hall and the Hall of the Loggia.

Other rooms accessible from the courtyard are: The Mayor Room, also known as the Baron’s Room, and the National History Library, which collects volumes on the history and politics of the city of Naples.

It was Alfonso I himself who had the Sala dei Baroni built, a representation room in full Renaissance style that took its name after the arrest, within the same, of many members of the Neapolitan nobility after a conspiracy against the king.

Once upon a time this solemn environment was enriched by the presence of Giotto’s frescoes, now lost, but fortunately the splendid architecture of Spanish influence by the architect Maiorchino Guglielmo Sagrera has remained intact.

On the lower floors of the castle, instead, there is the so-called Crocodile Pit, called in this way thanks to a legend according to which the sovereigns who had decided to dispose of a prisoner threw him into the pit through a trapdoor directly in the feed of the crocodile that inhabited the castle. A legend certainly fascinating!

Free for young people under 18 years old from the EU