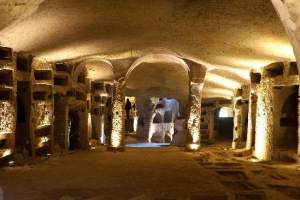 The invisible underground Naples is made of tunnels, pits and quarries Greek, catacombs, galleries of Roman and tombs carved into the tufa. It is a dark city, a place of passage through and between the known world and the unknown and quiet of the Underworld, where you confuse history and legends, faith and superstition. A submerged world with which the Neapolitans are reconciled to exorcise the fear of death, the tombs are the oldest Greek tombs of Sanità and Vergini , located 10-11 meters below the street level. The necropolis date from the fourth and second century. C. and are full of paintings and carved sarcophagi reminiscent Anatolian tombs, Macedonian and Alexandrian. For a long time were buried by the “lava”, that is by the river alluvial debris and mud until the ’60s has plagued this area. In fact, since the time of the Greeks was extracted tuff, used for construction, thus giving rise to immense caves and cavities. Even before the clay pits were put to ossuaries, the families of the greek-Neapolitan, which fused elements of Greek and Sunnis, who built elegant tombs. Hence the name of “Valley of the tombs.” In the same areas by underground tombs was then passed in the second century to the early Christian catacombs of San Gennaro, San Gaudioso and San Severo, who take their name from the remains of the martyrs.
In the vicinity of the shrine of Nostra Signora del Buon Consiglio (area of Capodimonte) extends the vast cemetery of the Catacombs of San Gennaro, born between II and IV century and spread over two levels and in most corridors, unlike those in Rome. Became religious place and burial when greeted the remains of Bishop Agrippino and in the fifth century were dedicated to San Gennaro, whose body seems to have been placed here for a very long time. In addition to exhibits and frescoes of artistic interest are a wonderful place, full of nooks and niches, large and small. Apparently near the saint could rest only the pure in heart, like children, and this explains the presence of small niches on the walls.
Until the eleventh century there were buried Neapolitan bishops, suffered looting between the thirteenth and eighteenth centuries and were finally restored after the transfer of the ossuary in Fontanelle Cemetery.

Reduced price for Under 18 – Over 65 – College students
Free for:
Disabled – Kids under 6