Visit the Castel dell’Ovo. Naples between history and legend 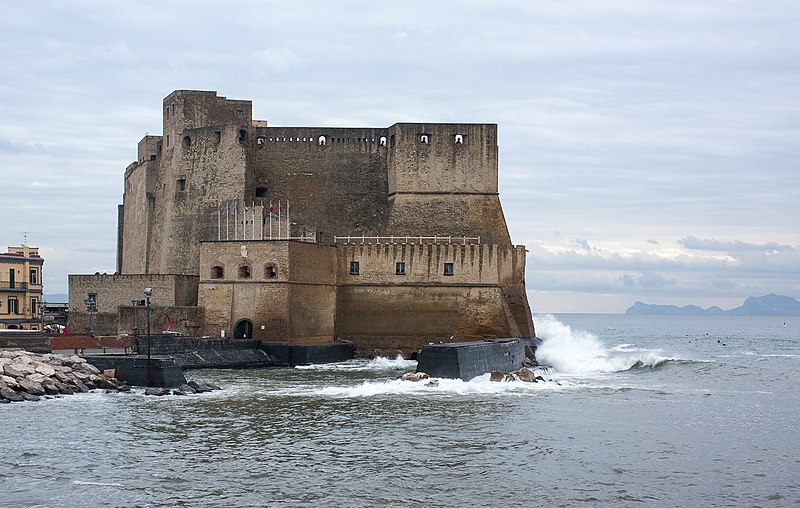 Visiting Naples also means immersing yourself in the culture and traditions of a non-conformist city, contradictory but at the same time capable of welcoming people and thoughts from all over the world. It’s really difficult to be just tourists here.

When you happen to walk along its promenade, you can not help but cross the legendary Castel dell’Ovo. It is the oldest castle in the city and stands on a rocky islet, formerly called Megaris, which was once totally isolated from the sea and on which stood a dependency of the great Roman leader Lucius Licinius Lucullus.

Its name comes from an ancient legend of medieval origin, which spoke of a castle in which Virgil, considered a magician of popular tradition, consecrated an egg, placed it inside a carafe and then in an iron cage, which was later hung on a beam of a “chamber” of the castle obtained in the tuff just for the occasion. From that moment on, the place, closed by heavy locks, was kept secret because all the facts and fortunes of the castle depended on that egg. This legend has conditioned so much the Neapolitan people that at the time of Queen Joan I (1327-1382) following collapses and devastation, there was a rumor that the egg was destroyed. The queen had to swear that she had replaced the old egg with another equally magical and protective of the city. A fascinating story that makes us understand the relationship of Neapolitans with magic and superstition.

About the present structure of the Castle, it is the result of stratifications and remakes that have changed the original shape. Already in the middle of the fifteenth century was an architectural organism different from that of the Angevin era, no longer turreted as originally but low and massive, able to better withstand the heavy artillery.

The medieval characteristics of the fortified citadel, which the sources show is full of towers and open to the sea with a large arch that connected the two parts of the island, disappeared completely during the sixteenth century.

Further transformations were carried out at the end of the seventeenth century, when a circular fort was added, stretched out over the sea at the behest of Ferdinando di Grunemberg. It was instead at the end of the nineteenth century that the current Castel dell’Ovo began to emerge, when the city began to extend towards the castle with massive works such as the completion of Via Partenope and later with the most recent works that have concerned the harbor and the docks.

Today, going up to the top of the fortress you can admire impressive and spectacular views of the sea and the city and live exciting sunsets pampered by the sea breeze and the sound of seagulls.

The City of Naples manages the internal spaces of the Castle and organizes exhibitions, cultural events, meetings and meetings. There is also a small permanent museum of the CAI section of Naples dedicated to the Etnoprehistory of Campania. Naples is always a magnificent surprise!