Visit the Fontanelle Cemetery. Naples between faith and tradition

The cemetery of the Fontanelle is an ancient graveyard of the city of Naples, whose structure dates back to the fourth century BC, a time when the was used for the extraction of tuff, building material highly used by the Greeks.

In this area, in fact, there were located the many quarries, used until the beginning of the seventeenth century to find the material used to build the architecture of the city.

The history of the Fontanelle cemetery also has another important date: 1656, the year of the plague in Naples. In that year the plague caused many deaths and the many lifeless bodies were often left on the street. It was therefore decided to use this quarry to lay the bodies.

The space of the necropolis is divided into three large galleries for a total of about 3,000 square meters. The first in order of entry, is called “dei preti” (the priests), because it was dedicated to the noble priests buried in the “holy lands” (underground tombs where the dead were placed during the process of decay, without a coffin), while the other two are the gallery of the plague victims, and the gallery of the pezzentelle souls (the souls of purgatory, object of great worship). 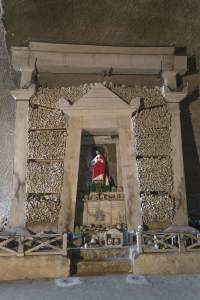 This mysterious place is located inside the Rione Sanità, one of the districts of Naples richest in history and tradition, just outside the Greek-Roman walls, in an area chosen for the pagan necropolis and later for the Christian cemeteries.

For about 400 years there are the remains of those who could not afford a burial and, above all, the victims of the great epidemics that have hit the city several times throughout its history.

In the nineteenth century were also brought bones from the burials of churches reclaimed after the arrival of the French Joachim Murat at the head of the kingdom, and other excavations carried out at that time. Also at the end of the nineteenth century dates the arrangement of bones by type (skulls, femurs, tibias) by the canon Gaetano Barbati and Cardinal Sisto Riario Sforza.

Today, visiting the ancient ossuary means immersing oneself in the historical memory of Naples, triumphantly crossing the various plagues that were once widespread in Europe and discovering the religious tradition of the Neapolitan city.

A tradition that is also quite well known in the area is the one that has linked, especially in the past, the faithful to the cult of the souls of purgatory, also called “pezzentelle“. This involved the adoption of a skull (also known as a capuzzella) by the believer, who welcomed it into his family in this way. This bridge between the living and the dead was considered a sort of association capable of helping both sides to overcome poverty, or the fact of being forgotten. 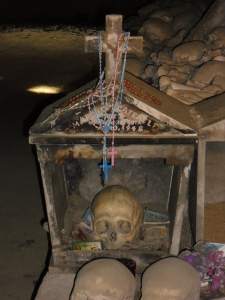 The faithful thus chose who to pray to and to whom to offer candles on their constant and regular visits. Only then did the dead appear in a dream and make himself known, according to popular belief. There were many requests for grace and miracles, many of which were the subject of rich thanksgiving and praise from the faithful.

The cult was extremely alive in the years of the Second World War and in the first decades of the Second World War; in fact, the war had destroyed families, divided relatives, and caused death, misfortune, destruction and misery. Since they could not expect help from the living, the people asked the dead to help them, and the evocation of the piece-of-shit souls thus becomes the concrete representation of the hope of miraculously escaping unhappiness and misery.